The recording of the Webinar is available here: https://www.youtube.com/watch?v=ptTUQnK6iik. 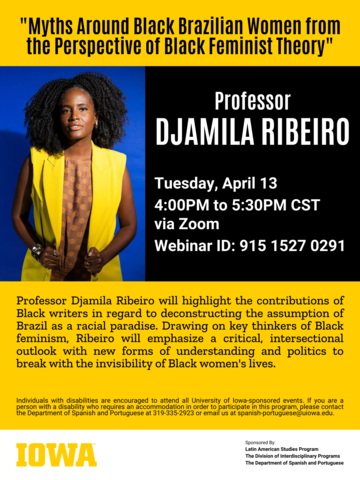 Djamila Ribeiro holds a master's degree in Political Philosophy from the Federal University of São Paulo. She is the coordinator of the Sueli Carneiro editorial Seal and the Plural Feminisms Collection, an independent editorial initiative that has changed the publishing market in Brazil. She is the author of several books and is a professor in the Journalism department at the Pontifical Catholic University of São Paulo (PUC-SP). A Columnist for Folha de S. Paulo newspaper, Ribeiro was Deputy Assistant of Human Rights for the city of São Paulo in 2016. She was awarded the 2019 Prince Claus Award, granted by the Kingdom of the Netherlands and considered by BBC one of the 100 most influential women in the world, the same year.

Sponsored by the Latin American Studies Program, Division of Interdisciplinary Programs, and the Department of Spanish and Portuguese.